I will now describe the architecture of the dialog markets system. I will first talk about sequential and tree-structured dialogs, the different roles they play, and how they can be integrated. Shortly after, I will discuss how to incentivize high-quality contributions to dialogs. To facilitate this, I first need to talk about what I mean by a “contribution”. I will then introduce the reward distribution problem, but mostly postpone its discussion to the next section. Finally, I will describe a set of components, including user interfaces, that together could form a practical dialog market.

A dialog is initiated by a person (or a program) who I will call the author (or asker). A dialog starts when the author asks a question. The goal of the dialog is to solve the problem that prompted the author to start the dialog.

When I hear “dialog”, my first association is with one-on-one conversations that proceed in a sequential manner, with each of the conversation partners taking turns. In the context of this project, I’m particularly thinking about text-based dialogs where each contribution is a short chat message, and where each participant can “append” a new response to the conversation at any time. This is a natural mode of interaction for most people. If someone asks a question, then this mode is well-suited for asking follow-up questions, receiving clarification, and providing small amounts of information. At each point in time, there is a clear context for new responses. If a question is asked, it is generally up to the other participant to either answer it or reject it by changing the topic.

While sequential dialogs are well-suited for transmitting information between two people, they are less well-suited for communication within a group, and also less well-suited as a means of knowledge representation. Within a group, we would like to keep track of multiple discussions at once. In this setting, hierarchical structure helps: it lets us navigate to the desired sub-discussion more quickly and allows different people to discuss different topics simultaneously. Tree-structured comment threads in particular have proven useful for discussions on the web. In this project, we’re particularly interested in tree-structured discussions where each comment is either a follow-up question or a response to a question. We can generalize the traditional setup slightly by allowing graph-structured discussions, i.e. the same sub-conversation can be included in multiple places within and across dialogs.

Since the tree-structured dialog also serves as the repository of knowledge about the current state of problem-solving for the asker’s question, it’s not enough to allow users to add to it. We also want users to be able to make edits, deletions, and structure changes, analogous to how you might edit a Wikipedia page. This changes the dynamics somewhat: when users add to the tree-structured dialog, they don’t “own” what they add; others can change it when they see room for improvement.

Let’s talk briefly about what individual elements in the tree-structured dialog may look like. There is a single top-level question. All other elements are either follow-up questions (to the top-level question, or to another follow-up question), or responses to questions. A response is not necessarily a complete answer. For example, if the question is “What are some potential causes of the flu?”, a single response could be “Influenza virus type A”.

Questions can restrict their answer format. This is most useful for questions directed at the asker, since we would like to minimize how much work they need to do. For example, there can be binary, multiple-choice, fill-in-the-blank, and free-form questions. We can also imagine more complex answer formats, such as files that need to be uploaded, camera pictures that need to be taken, or locations on a map that need to be selected.

In the next section, I’ll talk about how we want to reward contributions based on how helpful they are. This will require that we know what we mean by a “contribution”. As mentioned above, in addition to adding content to a dialog, there are other actions that users can take to modify the state of the dialog: They can make edits and structure changes, delete content, propose to send a notification to the asker, perhaps upvote such a proposal, perhaps propose to pay a reward to some user, and there are probably other actions that I am not thinking of right now. So, when I am talking about a “contribution” in the following, I will refer to the set that includes all such actions that change the state of the dialog in one way or another. This is comparable to making changes to a set of files and directories under git version control: each commit is an action.

When the asker starts a dialog by posing a question, they can also pledge a reward. (I will primarily be thinking about monetary rewards, but we could also replace this with another quantifiable, transferable source of value, such as magic Internet points.) The role of the dialog market system is to distribute this reward to (the authors of) contributions based on how helpful they are, in order to incentivize dialogs that are most helpful to the asker (discussed in the next section). Pledges draw the attention of answerers to dialogs with the highest rwards. The asker (and other users) may also be able to pledge additional rewards for sub-questions in the tree-structured dialog in order to encourage additional work on these questions.

What are rewards used for?

How can we distribute rewards in a way that incentivizes dialogs to be as helpful as possible? There are at least two ways in which the system can use rewards:

I’ll discuss reward distribution strategies in more depth in Section V. For now I want to cover some general properties that we would want this use of resources to have, ideally:

Let’s talk about a system that could make use of the principles described so far.

A key design goal behind this system is that its core is minimal. To the extent that complex mechanisms are necessary to answer questions, we would like to offload this work as much as possible to market participants, such that these mechanisms can be subject to improvement under competitive pressures over time.

For example, one can imagine sophisticated knowledge representation mechanisms for automating parts of dialogs. We would not want such structures to be part of the core system.

Similarly, there are many specific techniques we could use to improve the quality of contributions in this kind of system (e.g., Eigentrust, Bayesian optimization, Bayesian truth serum, ask about counterfactuals, adversarial setups, costly identities + reputation). My hope is that we can find a core market mechanism that establishes the right incentives, so that adding other techniques (via bots, see below) is profitable if and only if it improves the quality of dialogs.

I will now talk about the different (central and less central) components of the system: there is the dialog market itself, the reward computation system, user interfaces, and automation through bots. 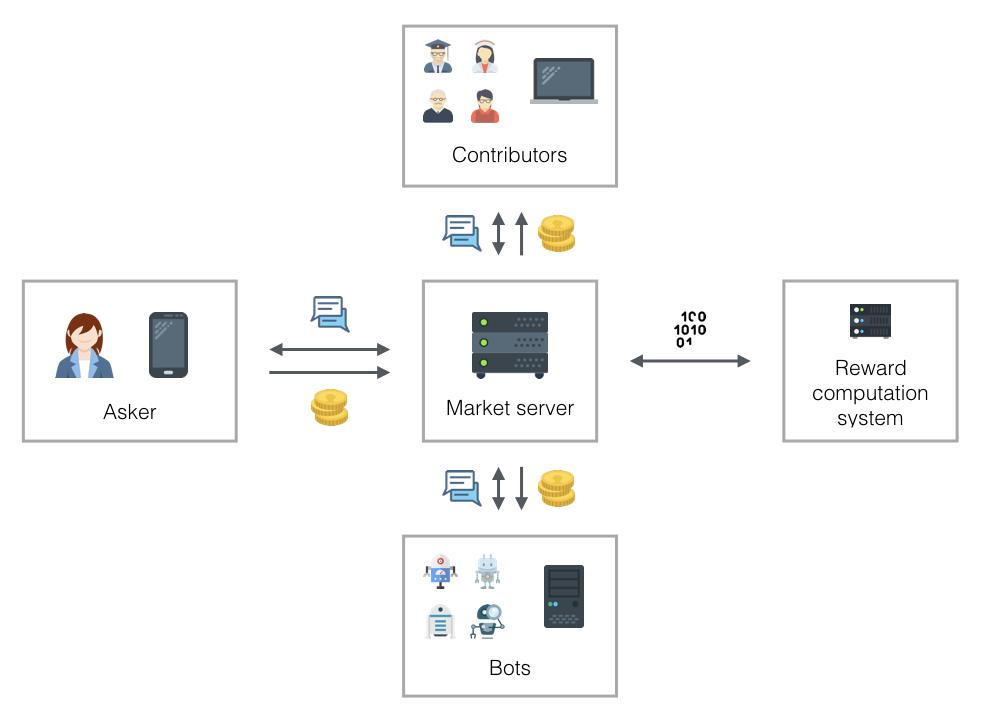 The dialog market server manages user accounts, the creation of dialogs and contributions, and incoming and outgoing payments. The distribution of payments depends on the reward computation system. The dialog market server is simply an API endpoint, i.e., it only talks to other machines; there is no user interface. This is the primary point of interaction for people who write bots.

The reward computation system takes as input a pointer to a dialog and (control of) a budget for judging the contributions in this dialog. It returns (eventually) an answer to the question of how to divide up the total reward over individual contributions. This system is also just an API endpoint and doesn’t interact with users directly. It depends on the dialog market, as it may need to create dialogs and sub-questions to elicit information that is needed to compute rewards.

I can think of two user interfaces that would be useful. 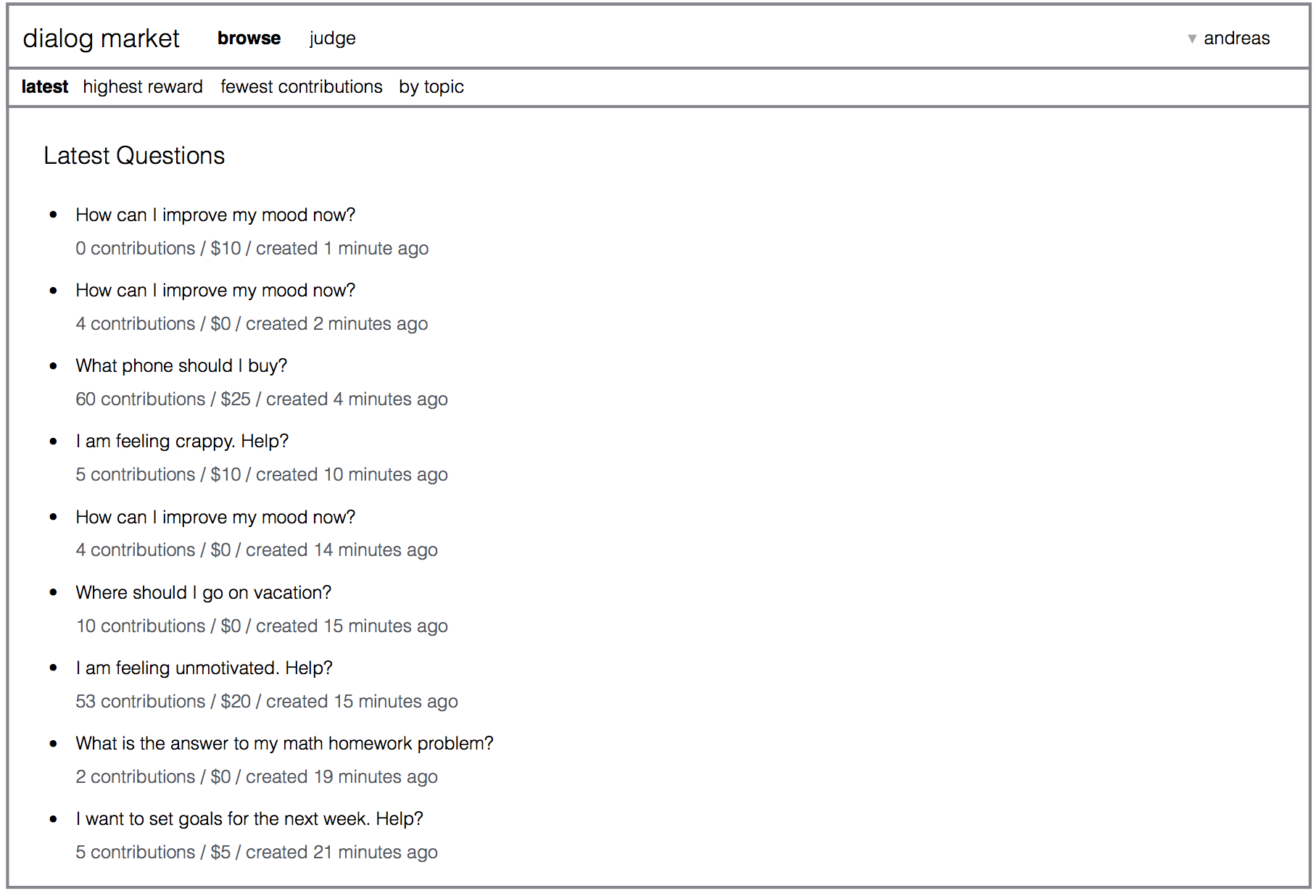 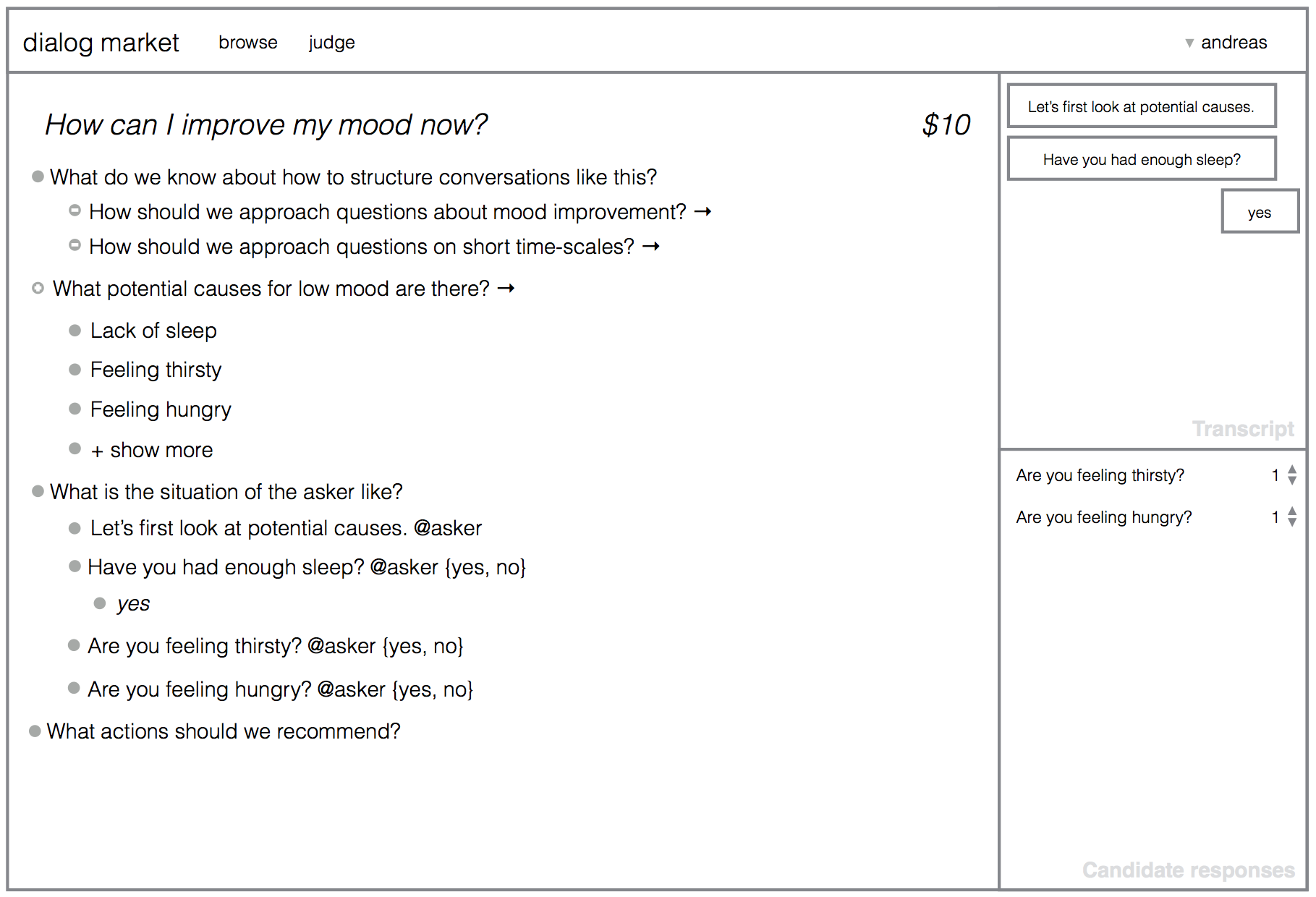 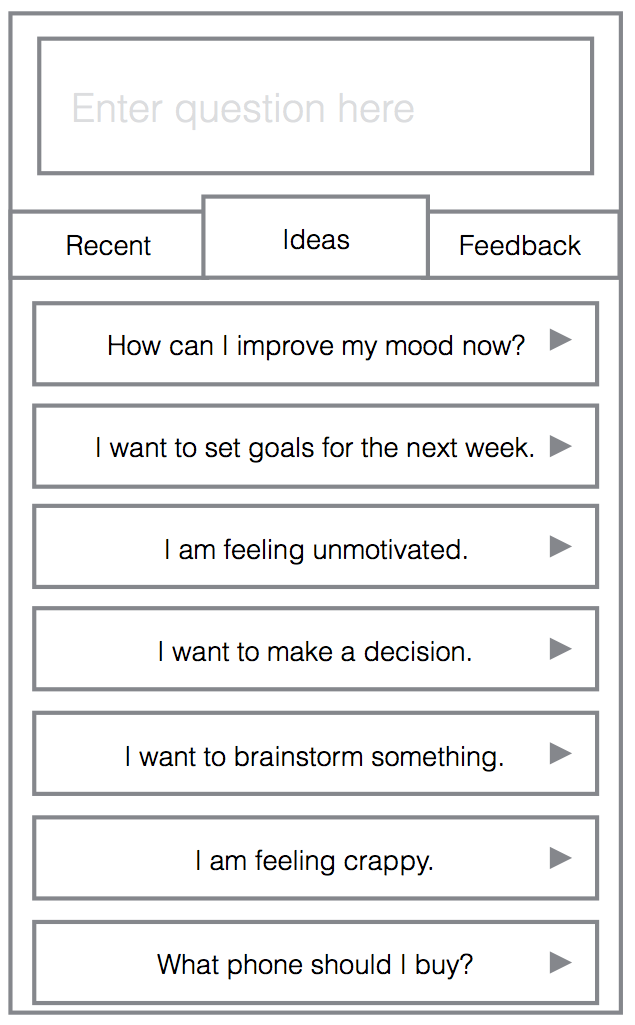 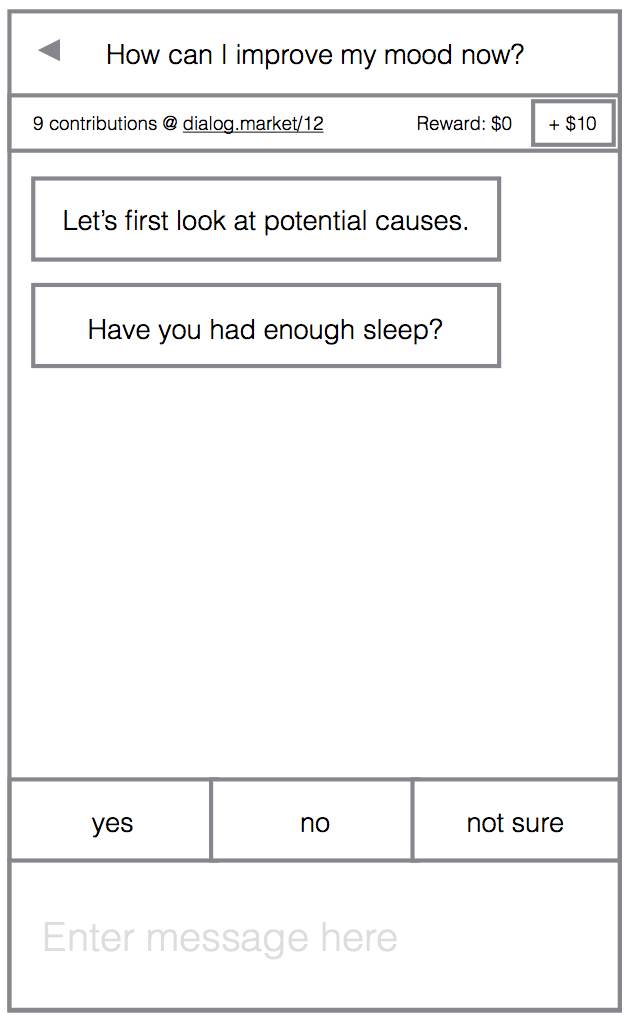 Finally, there are programs that interact with the dialog market server. I’ll call these programs bots. This component is not strictly necessary, and may to a large extent be developed by people outside of the organization running the market, but I expect that it will play a key role.

Initially, I expect almost all answers to come from humans. Over time, some answers and follow-up questions will repeat. A simple bot could replay contributions that were previously useful in the same context. The notion of context identity used here could be expanded over time using natural language processing tools. In this way, the system supports incremental automation.

Over time, this could result in good decision trees: bots could automate more and more contributions until the entire process of solving common problems is automated except for border cases. In other words, after some time, no human intervention would be necessary to solve the most common problems; only when we get to the fringes of the decision tree would human intervention be necessary.